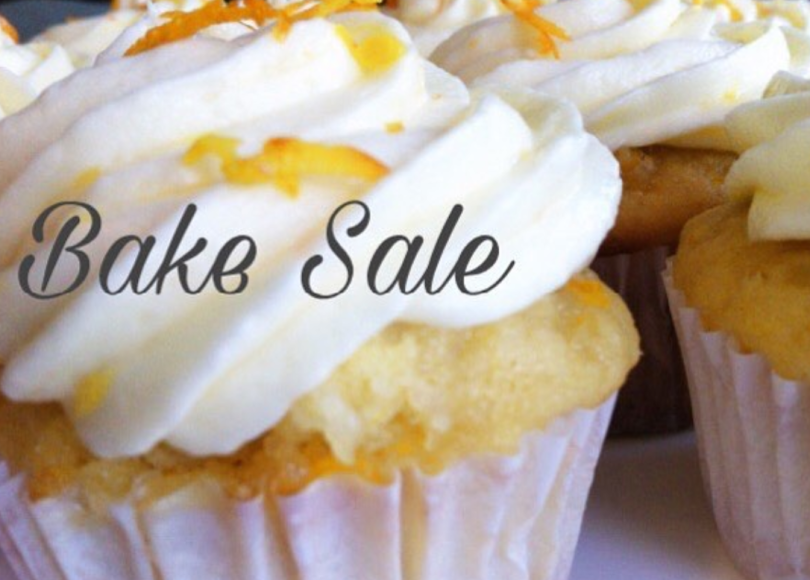 I had no idea how important bake sales are to frustrated bakers until I volunteered to bring cupcakes to my daughter’s Show Choir fund-raiser!  It wasn’t a conscious decision to compete, but I figured this would give me the stage on which to debut my newly created Orange Blossom cupcake recipe.  I actually thought my cupcakes would be the most beautiful, desirable and delicious ones at the bake sale and even suggested they could bring in $2 instead of the usual $1 per item. 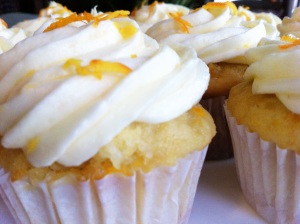 I arrived a little late and noticed that the table was almost full.  A nice man, working at the table, reached out to accept my donation; I declined and slipped into the back-room to finish frosting my cupcakes. Once frosted with swirls and orange zest, I went to set them up on my fancy tiered cake-stand.  To my horror, someone had already used it for some store-bought carrot cakes.  I quickly assessed the situation and moved those artificial excuses for baked goods aside.  The nice man asked if I made cupcakes professionally…he said they looked like the ones on TV!  “No”, I replied, “I just love to bake” but I was taken aback by his clear recognition of raw talent.

During intermission, I slipped back out to see what was happening at The Bake Sale.  My cupcakes were moving, but not nearly as quickly as I had anticipated.  That’s when I noticed the plate of generic store-bought chocolate chip cookies was going faster than my cupcakes!  This would just not do.  I had to start a marketing campaign-surely once they tasted the buttercream with fresh orange zest, there would be no more confusion.  I stood there for a moment, watching people make their purchases and decided it was time to refill.  Despite an inquisition by a bossy woman who seemed to be in charge, I continued to load up the cupcakes.

After I made my escape, Bill and I worked the room, stalking unsuspecting patrons as they took their first bites.  One woman gave her daughter a bite and then told her to go buy her own.  I thought that was a good sign.  A young man walked by me with one of my cupcakes and I actually tapped him on the shoulder and said “I made those”.  What in the world was wrong with me?  We just stood there, watching to see who bought one so we could saunter up and capture their reaction.  The man behind the table looked at us like we were crazy and all of a sudden it hit me…I had become a ‘psycho bake-sale stalker’.  Definitely not one of my prouder moments.

Who knew?  I was completely caught off guard but I learned a great lesson that night…wanna-be bakery owners should not bring their wares to school bake sales, hoping to get discovered.  This makes them uptight, territorial and fairly unbalanced.  Rather than succumb to this embarrassing demise, I plan to avoid bake sales from now on!

Postscript:  I wrote this back in 2010.  It’s now 2018 and I’m happy to report that I have no desire to open a bakery OR take my cupcakes to school bake sales.  However, I never gave up on making them for loved ones and I must humbly admit that my flagship recipe for Orange Blossom cupcakes has been a hit ever since.  So if you want to try ‘the’ cupcake that taught me some important lessons about life, just click here and enjoy! 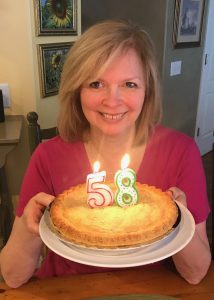 Hi, I’m Liz, a recipe creator, home chef, mom and food blogger focused on delicious and nutritious family food traditions. My quest is to help make your life healthier, your meals tastier and your family happier!