Back when I was in the throes of raising 7 kids, out of desperation, I started using a cookbook called “Deceptively Delicious” to get them to eat their vegetables. Have you seen this cookbook?  It was written by Jerry Seinfeld’s wife, Jessica. It was all the rage then so I decided to join in on the fun. Basically you cook, puree and freeze vegetables in zip-lock bags to use in her recipes. I did this for a few weeks and it was hilarious…we had brownies with spinach, flautas with yellow squash and carrot puree, mashed potatoes with cauliflower puree and macaroni and cheese with butternut squash.  It was extra work, but they were getting their vegetables, even if I was sneaking them in! 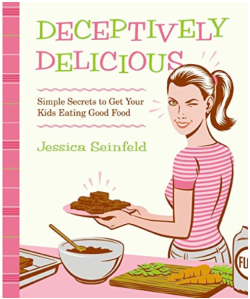 Then one night it happened: after eating a meal laced with yellow squash and cauliflower puree, my family all got stomach aches and major gas!  I felt so bad that I confessed and determined from then on, I would serve up veggies in all their glory, no more sneaking!  I hoped by knowing what they were actually eating, they would learn to enjoy their vegetables.

This is when I created my own version of Pasta Primavera.  Loaded with vegetables and just enough parmesan cheese to disguise the taste, my kids actually liked it (although I did notice a lot of extra veggies left in the pan)!

I put my recipe together back in 2008, but hadn’t done any research on Pasta Primavera until now. Turns out the original was created here in the United States by a man named Sirio Maccioni, an Italian restaurateur and author. Here’s the story in his own words:

“I believe it started in 1975, when I visited Prince Edward Island with a number of colleagues, including Craig Claiborne of the New York Times. To eat we had only lobster and wild boar. After a week of this, everyone said, “Can we have some pasta?” I set out to make two dishes, one with vegetables, one Alfredo style. But in the end I mixed it all together, vegetables with spaghetti and cream. After Claiborne wrote about it in the Times, everybody started to come to Le Cirque and ask for spaghetti alla primavera. But my French chef said, “You want to do spaghetti? I don’t want spaghetti in my kitchen!” I didn’t want a crisis. So I decided to prepare it in the dining room, on a cart, table side. It looked nice, and it tasted nice. We’ve never put it on the menu, but people still ask for it.”—Sirio Maccioni, co-owner of Le Cirque restaurant in New York City 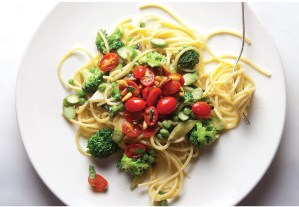 My recipe may be different from the original, but who can resist creamy pasta combined with sautéed or roasted vegetables, fresh tomatoes and basil? It’s a filling, nutritious and delicious meal all in one bowl. I hope your family will enjoy Pasta Primavera as much as mine did!

Put water for pasta in a large pan on high; add a splash of olive oil and a dash of salt; cover.  When water comes to a boil, add pasta and cook according to package instructions. Drain and set aside.

While pasta is cooking, pour 3 T olive oil into a large skillet set to medium heat.  When pan is warm, add the chopped garlic and onion. Stir and cook for 1 minute; add broccoli, asparagus and red pepper. Stir and cook for 2 minutes. Add yellow squash, zucchini and Herbs de Provence; stir and cook for another 3 minutes or until all vegetables are tender but not mushy. The color will be more vibrant if you don’t over-cook them.

Once vegetables are cooked, add pasta, half & half, parmesan cheese and butter to the pan. Mix to combine and warm through, allowing liquid to be absorbed by pasta. Salt and pepper to taste. Put in a serving dish and top with fresh cherry tomatoes, chopped basil and parmesan cheese.

I like to kick this recipe up a notch using the tasty finish inspired by Sirio Maccioni ‘s original Spaghetti Alla Primavera: Bring 2 T of olive oil, 1 chopped garlic clove, the tomato halves and the chopped basil to a simmer over medium heat for 3-4 minutes. Pour over pasta and serve.